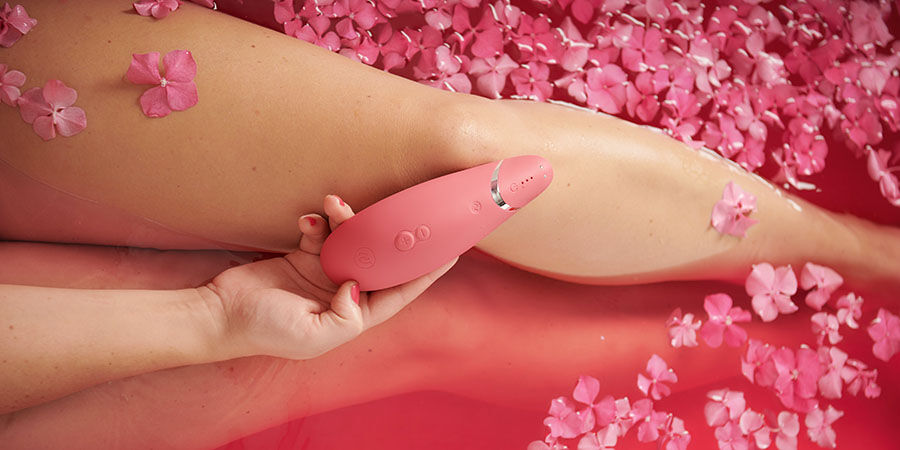 We don’t know if it has to do with the intimacy, the steam from the hot water, the feeling of relaxation, the nudity, or a mixture of everything — but the truth is that it’s very enjoyable. But if you've tried it, you'll know that it doesn't always turn out as well as the movies make out. Invest in a non-slip mat so you don’t have an unfortunate accident and read on! You’ll find out how to combine these two pleasures and the tools you’ll need to enjoy it to the fullest! Get ready, get wet — go!

Well, it’s a pleasure — like that first sip of coffee in the morning or enjoying a beautiful sunset. And there are only so many pleasures in life, so it's a good idea not to squander any of them. If you’re the type who always needs practical reasons, consider this: you’re already naked, you’re alone (although it’s also nice when you’re accompanied), and the hot water is already caressing your body. The temperature is perfect and so is your mood. There really is no better way to start or to end the day. Just one thing though: Unless you're really turned on by the thought that someone might literally catch in the act, don't do it in the showers at the gym.

Listen up, girlfriend — this is for you! The delights of a stream of water applied in just the right place and at just the right power are very well known. In fact, women already knew of the joys of masturbating with water jets during the early years of Victorian England, as historian Josep Lapidario explains: "In the women's sections of luxury spas it was common to find these so-called 'local pelvic region stimulating' showers". So you see, having fun with the shower head isn’t something that was invented by millennials! The key is to relax and begin by moving the jet back and forth in the direction of the clitoris while using gentle circular motions. The water pressure, of course, is crucial; if your shower is barely a trickle, you won't get aroused — so keep that in mind when you choose your next home!

If you know how to touch yourself and take yourself to heaven, you can also let the water fall on your body while your hands get to work. But here is our top recommendation for this purpose: did you know that there are sex toys that are specially designed to be used underwater? The best thing to do is try one: the combination of intimacy, heat, steam and technology is amazing.

The girl in 'Psycho' wouldn’t have looked so terrified if she’d at least been given a clit sucker to liven up her shower for a while. It surrounds your clitoris without making direct contact and stimulates your every nerve ending with powerful pressure waves that'll take you to orgasm in no time at all. Well now try using it underwater; you'll feel completely new sensations. Luckily, most of the clitoral suckers you'll find in EroticFeel's online sex shop are completely waterproof. From the acclaimed Satisfyer Pro-2 Vibration to the much-desired LELO Sona, the LELO Sila, the Satisfyer Curvy or the Womanizer Classic.

We guess we don't need to explain the basics; you know exactly how to use your hands in or out of the shower to reach orgasm in a matter of minutes! However, perhaps you’re not aware that there are  male masturbators that will turn your fun in the shower into the eighth wonder of the world — we say eighth because the first seven are already taken! Pay attention. From the Satisfyer Men Heat Vibration that stimulates the glans with multiple vibration patterns to LELO's F1S Developer's Kit or the LELO Bruno prostate massager — almost all male sex toys are waterproof. Cock rings, anal vibrators... anything you can think of. The pleasure will be greater from now on — and so will your water bill!